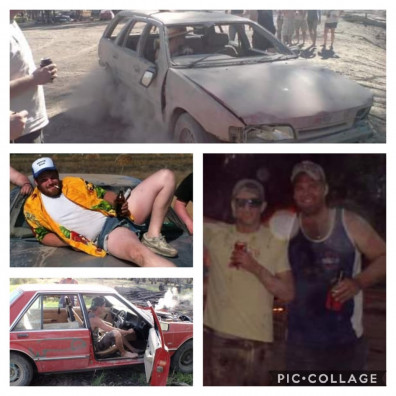 Benny McCallum & Rob Walker here. We are really excited to be taking part in the Shitbox Rally 2022.

This event involves setting out on an epic journey beginning in Wollongong NSW, finishing in Mackay QLD, but not straight up the coast mate.. We’ll be going via Tibooburra NSW. Travelling over 3,400KMs in our Shitbox ’92 EB Ford Wagon in an effort to raise funds for Cancer Research & to grow awareness.

The Shitbox Rally has raised over 27 Million dollars since it's first event in 2009. It’s the largest community lead fundraiser for the Cancer Council in Australia. Part of the participation is that all teams must raise a minimum of $5,000 though most teams will exceed this goal. We are pumped to be joining in on such an important cause with 200+ other entrants.

Fundraising is the hard part so any donation – no matter the amount is greatly appreciated. Your generosity of sponsorship will be displayed proudly on our Shitbox (company or personal name).

Benny & Rob are childhood mates, originally from a tiny town – Wakool, NSW. Like most people, they have both been affected by the struggles & loss associated with the dreaded Big C. They’ve both shared the loss of close family friends near & far from Wakool.

Sadly, Benny lost his Dad, Bob (Bobbis) in 2011 to throat cancer. Then a best mate & a young father, Ginger (Big Rod) to pancreatic cancer only 3 months later. Another great mate & father figure, Glen (Big Donk) also lost his battle to bone cancer in July of this year. All men of which Rob knew very well too. Ben’s Uncle Lydon also died of throat/nose cancer in 2020. Regrettably, Rob’s wife lost her mother Sharyn to breast cancer as a child. There are many others who they would like to pay tribute to & will do so by noting names on their Shitbox vehicle.

Both boys were supposed to race in 2020 though Covid unfortunately postponed things. Then it turned out that they needed to postpone the race once more in 2021 because Rob’s & his wife discovered they were expecting babies – numbers 3 & 4 (Twins! A boy & a girl, born in April 2021) & Benny & his wife were due with their second child (a son born in June 2021), so with 3 extra lives (between them) popping up right around when the race was on.. 2022 would have to be the year! It’s been a long time coming & the boys are eager to get their Shitbox Rally adventure going!

Cheers. We will keep you posted with The Shitbox progress & event details.

Shitbox Rally is the adventure of a lifetime challenging participants and their cars, worth no more than $1,500, over a 7 day across Australia endeavour to raise money for cancer research.

The rally is not a race – it’s a fun, colourful, unpredictable adventure with participants travelling at their own pace in smaller groups. Vehicles often break down but “we never leave anyone behind” and each night is spent camping beneath the stars and celebrating the day’s achievements. It all adds up to an incredible opportunity to see Australia’s vast and beautiful countryside and make lifelong friends, many brought together after experiencing cancer themselves or seeing cancer impact family and friends.

Since it’s inception the rally has been the largest fundraiser for the Cancer Council nationally.

Shitbox Rally is a dedicated fundraising event for cancer research with funds going to Cancer Council.

Cancer Council is one of the largest non-government funders of cancer research in Australia. We conduct and fund research studies across all cancers and all stages of the cancer journey.

Thanks to the community funds raised such as Shitbox Rally we can fund world-class research that reduces the impact of cancer for everyone.

More than $30 million over the past 12 years has been raised by Box Rallies to date, supporting ground-breaking projects such as:

These projects wouldn’t be possible without your support.